Parks and Other Sites Relating to Grant's Military Career

Hardscrabble, or Grant's Cabin, in St. Louis, Missouri, from the National Park Service

Fredericksburg and Spotsylvania (Includes the Wilderness)

The cabin at City Point

Story behind the lion statues from House of Cards, with actual photos of the construction of this memorial 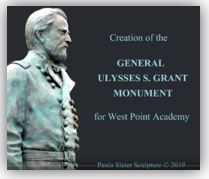