The Wedding of the Century 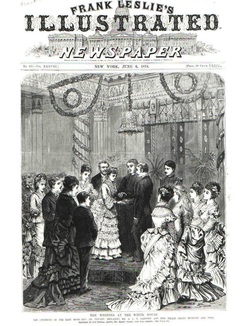 Information About Her Life

Married in a spectacular White House wedding on May 21, 1874 to Algernon Sartoris of England.

Ulysses and Julia's Distress Over Her Marriage

Romance of Nellie Grant, from Old and Sold.

Poor Little Nellie Grant and the 'Wedding of the Century.'

She moved to Southhmpton, England with her new husband, the but marriage proved a failure and she returned to the United States, living with her mother until the latter's death in 1902.

The home she and Sartoris lived in at Southampton.

In 1912 she married Frank Hatch Jones, first Assistant Postmaster under President Cleveland, and lived in Chicago. A few years after her marriage to Jones, she suffered a stroke and was an invalid for the rest of her life.

Nellie died in Chicago in 1922 and is buried in Oak Ridge Cemetery in Springfield, Ill. near the tomb of Abraham Lincoln. New York Times obituary. She outlived her parents, one of her brothers (Fred) and her youngest daughter, Rosemary. She lost one child in his infancy.

Information about her at the time of her death in the Journal of the Illinois Historical Society, October 1922.

Picture of Nellie as "the old lady who lived in a shoe," taken during the Civil War as a fund raiser for the Union cause.

A museum in Griggsville, Illinois, her second husband's home town, has items owned by Nellie on display. Skinner House and Museum.

It was widely reported in August of 1879 that Nellie had died in England. This turned out to be false information (it was her mother-in-law, Adelaide Kemble Sartoris, who had died), but several newspapers ran her obituary (see the side box for one). For an account of how the Grants received this news, see The Papers of Ulysses S. Grant, October 1, 1878 to September 30, 1880, p. 252-253, available in Google Books.

In the side box see a letter from Nellie reminiscing about her father.

Nellie as a Teenager 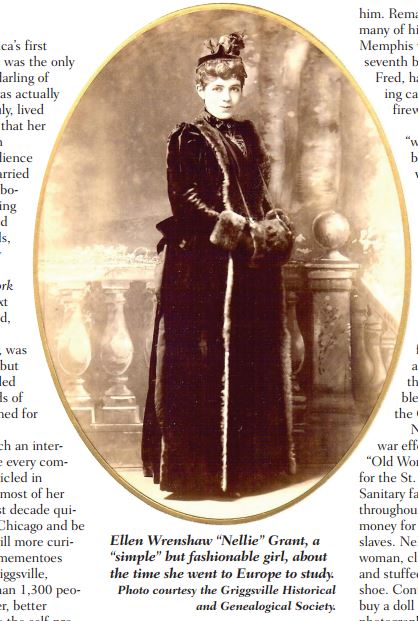