Dr. Marie Kelsey, retired Professor from the Department of Education, is the author of Ulysses S. Grant: A Bibliography. She is a scholar, historian and perennial friend of the Library. 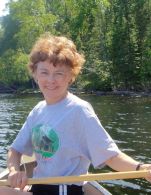 1.  Ulysses S. Grant: His Life and Character by Hamlin Garland.1898.
Hamlin Garland was not sure he wanted to do a biography of Grant, but the publisher convinced him to take it on. Garland decided if he could write it like a novel, he would do it. By that he did not mean he would make things up (and in Grant’s case, truth is indeed stranger than fiction anyway). Rather, he proposed to tell the story in a way that did not presuppose the outcome of a life that started inauspiciously on the Ohio River and ended tragically on a mountain in the Adirondacks. What happened in between unfolded as an epic story infused with honest details of the 19th century and authenticated by Garland’s interviews with people who actually had known Grant, including his wife, one of his sons, and even General Longstreet of the Confederacy to whom Grant was related through marriage. As Garland investigated, read, and interviewed, his admiration for Grant increased. After amassing a large quantity of material he said, “As I entered upon my search for biographical material, I found myself weighing the mass of confused testimony. On the one hand I discounted the testimony of those whose political prejudices led to a belittling of the general, and on the other made allowance for the loyalty of his friends. But this fact stood out: the closer I got to his fireside in camp as well as at home, the plainer, simpler, and more admirable he became. … To me, his life was more essentially epic than Lincoln’s, and the deeper I dug into his records the keener my interest became. … He grew with circumstances but kept his head, his poise through it all.”  Great book about a great American.

2. River of Doubt: Theodore Roosevelt’s Darkest Journey by Candice Millard. 2005.
Anything about our 26th president is fascinating because he lived life to the fullest! And he was a brilliant, ebullient, moral family man, an adventurer and prodigious author to boot. Deeply disappointed in his 1913 electoral defeat he sought a way to challenge himself through a physically punishing adventure. He set off for South America where he and his son became involved in an expedition to find the headwaters of Rio da Duvida, the River of Doubt, later renamed the Rio Roosevelt. To say this trip was rigorous is an understatement. His physical condition deteriorated to the point that he attempted to stay behind so as not to slow down the expedition. Had he done this, it would have meant certain death. Of course he was persuaded to continue, but when he returned home, his physical appearance had so changed people hardly recognized him and Roosevelt himself believed this escapade took 10 years off his life. The old Rough Rider was probably right.


3. The Devil in the White City by Erik Larson. 2003.
You think we’ve had serial killers in the 20th century? They had nothing on “Dr. H. H. Holmes,” portrayed in this work of nonfiction which has remained on the New York Times Best Seller List for 206 weeks and counting. Juxtaposed against the glitter and revelry of the Chicago Columbian Exposition of 1893 (World’s Fair) is the horrific tale of a devilish, but brilliant and manipulative womanizer who opened a pharmacy and built a bizarre “castle” in the White City right before the fair opened. This is only a small part of the wily imposter’s life story that makes recent newsworthy criminals look like rank amateurs. If this book isn’t enough for you, you can follow it up with the graphic novel The Beast of Chicago, by Rick Geary!

4. Madame Bovary by Gustave Flaubert.
First serialized in La Revue de Paris in 1856, this novel landed French author Gustave Flaubert in court on obscenity charges. After he was acquitted, the book version became a bestseller. Gee, I wonder why. Flaubert was a known perfectionist who said he was always looking for “le mot juste,” or, the right word. If you read this book in tiny print on thin paper, you really get the sense of Flaubert’s art. It is the story of an unpolished  rural French physician, Charles, and his marriage to Emma, a sheltered young woman who indulged so much in romance novels she believed them to reflect real life. Charles Bovary did not measure up, sending Emma into a series of flings and a tragic downward spiral. It is an early example of realism in literature with Flaubert’s richly descriptive and detailed narrative telling the ironically unromantic tale of an amoral woman seeking the ultimate romantic liaison without moralizing about it. It’s been called the “perfect work of fiction,” and really, would it surprise you to know that there is nothing obscene in it?

5. Into the Wild and Into Thin Air, both by Jon Krakauer.
These two books by Outside magazine’s famed journalist give new meaning to the expression OMG! Both are mind boggling stories of people on adventures that go terribly awry. Krakauer was an actual participant in one of them (climbing Mount Everest). Krakauer tells stories in a way that makes the hair stand up on your arms, but then, they are hair raising stories in their own right. Into the Wild is about a brilliant young idealist who graduates from Emory University, berates his parents for giving him a new car for this accomplishment and drives off in his old yellow Datsun for parts unknown. Into Thin Air is about the 1996 Mount Everest disaster. That’s all I am going to say. If you have not read these books… you should!


What are you reading now?

The Tudors: the Complete Story of England’s Most Notorious Dynasty by G. J. Meyer. 2010.
To supplement my current viewing of the Showtime series The Tudors on Netflix. I am not reading every word of this book, just enough to let me know which of Henry’s enemies and associates gets sent to the Tower next!

Desert Island Pick (this is your bonus title--the book that you can take along to the island for sheer reading pleasure):

Anything by Mary Higgins Clark.