HON 4885/HIS 3305 - The Holocaust in Comparative Perspective: Selected Reference Books 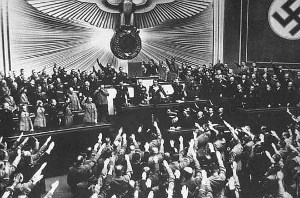 "German Chancellor Adolf Hitler receives the ovation of the Reichstag in Berlin in March 1938 after announcing the “peaceful” acquisition of Austria." Image from Credo Reference.

Getting started with encyclopedias

Admit it. You've used Wikipedia. Not that there's anything wrong with that! Hey, you probably used it because you found it useful. The speciality encyclopedias that the library offers can be just as useful when you set out on a scholarly activity like  this Honors class. Encyclopedias offer ...

Please take advantage of the great step up on your research you can get by starting off with a specialized encyclopedia. But, everything comes with a cost, as you should know. A large part of our collection is in print. You will have to visit the library, which, from most places on campus, is less than one lap around the Wellness Center track.