HON 4885/HIS 3305 - The Holocaust in Comparative Perspective: Introduction The Holocaust—the systematic destruction of millions of people, mainly Jews but others as well, by the Nazis and their collaborators—stands out as the most notorious case of mass murder in human history.  It epitomizes the human capacity for evil, which capacity, in the Holocaust’s dark light, appears to be virtually unlimited.  The word “genocide” was coined after the Second World War to describe that evil and to galvanize efforts (in human rights and international law) to contain it.  This course explores the history of the Holocaust, tracing the rise of the Third Reich, its unleashing of the Second World War, and its implementation of the “Final Solution.”  Topics include the history of European anti-Semitism, Nazi ideology, the role of “ordinary Germans,” and collaboration, resistance, and indifference outside Germany. We shall examine the Holocaust as a pan-European event, placing it in the broader perspective of the history of genocide and comparing it in particular to Stalinist mass murder in the Soviet Union.  Finally we shall consider philosophical and theological questions about the meaning of the Holocaust and other forms of radical evil.  Readings will consist of works of scholarship and witness. 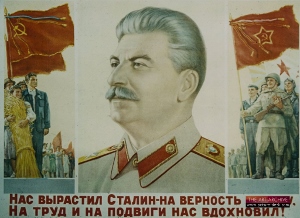 "Russian propaganda poster found in Seoul, Korea after the invasion of the United Nations troops in 1950 at the outset of the Korean War." Poster. n.d.  Image from Art Museum Image Gallery.