HON 4885/HIS 3305 - The Holocaust in Comparative Perspective: Books 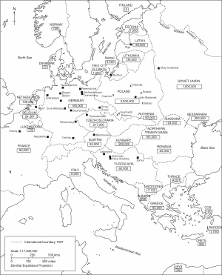 The main concentration camps and estimates of the numbers murdered from each country. Image from Credo Reference.

A good read from the Library

Getting started with books

Borrowing books from other libraries

The CSS Library still keeps the five volumes list of subject headings (called the "red books") in a dictionary stand across from the circulation desk. Browsing the print books is sometimes easier than using the online version, but you can search the red books online.

If you aren't familiar with LC subject headings (and most people aren't) than can seem clunky & stilted. But, what they are trying to do is describe all the world's knowledge with the same precision as anatomists have described every part of the human body. It's just that words are slippery, and often have more than one meaning. The LC system is not perfect, but the alternative is no system.

Seeing the organization of LC works best in large catalogs such as WorldCat. And easy way to start to access subject heading is presented in the section to the middle column - "make user of the bibliography."