Archives of The College of St. Scholastica: About the College

Find out about our history through an online publications database, photos, stories and more!

Community
Sharing responsibility to create and support community. Creating a climate which promotes a sense of community while valuing the uniqueness of the individual. Manifesting an ability to adapt to circumstances without compromising our values.

Hospitality
Creating a welcoming atmosphere personally and institutionally. Listening and responding sensitively to all. Extending warmth and acceptance to all. Welcoming new ideas and being open to change.

Respect
Cherishing and promoting the worth of all human life. Treating persons with dignity and reverence without regard to age, gender, race, minority, sexual preference or economic status. Honoring and supporting the spirituality of each person. Valuing the dignity of all work. Promoting participation of all persons in the decisions affecting their lives.

Stewardship
Utilizing human resources responsibly. Providing wise and respectful use of all material and monetary resources. Promoting prudent use of resources and energy. Finding time for work, play and prayer in daily life, which will promote physical, mental and spiritual growth.

Love of learning
Preserving the intellectual and material heritage entrusted to us by past generations. Transmitting the treasures of human culture to new generations. Creating scholarly, artistic and scientific works which enrich and enlarge human life. Integrating thought and action as complementary aspects of a full human life.

The College of St. Scholastica is committed to fostering a learning environment that is culturally diverse and pluralistic. Informed by our Benedictine heritage and its values of community, hospitality, respect, stewardship and love of learning, we are compelled to be open to diverse points of view and not avoid dissent, while constantly being mindful of what it is to be an engaged community working for social justice. To do so recognizes human dignity, difference and equality that includes, but is not limited to: race, age, class, gender, sexual orientation, physical abilities/qualities, and ethnicity.

In our striving to be an inclusive community, we must engage in intellectual discourse and exchange if we hope to develop an understanding of our commonalities and differences, even if this discourse and exchange result in conflict and change. The challenge that lies before us as a community is to embody in our institutional life what it means to be truly committed to cultural diversity and pluralism.

Shaped by the Catholic Benedictine heritage, The College of St. Scholastica provides intellectual and moral preparation for responsible living and meaningful work.

History of the College

The College of St. Scholastica owes its existence to the combining of two forces: Benedictine missionary zeal and the mushrooming settlement of Duluth. The school’s origins date back to 1892, when Mother Scholastica Kerst and 28 sisters arrived from St. Benedict’s Academy in St. Joseph, Minnesota, to spearhead the establishment of a Benedictine mother-house and an academy in Duluth. Initially, both convent and school were quartered in Munger Terrace. Within three years, increasing enrollment required building a new facility at Third Avenue East and Third Street. Named Sacred Heart Institute, the high school continued to grow rapidly in size and prestige. Duluth’s rapid expansion at the turn of the century led to a third move in 1909 – this time to The College of St. Scholastica’s present location.  In response to the growing community’s needs, the Villa expanded its high school course offerings in 1912 to include a junior college and changed its name to The College of St. Scholastica. The new college started with only six students, but it retained all of the traditions and many of the practices of the institute, which provided a continuity and stability lacking in many new institutions. That first year, 52 courses were offered in eight departments. In 1924, the College became a four-year liberal arts institute with an enrollment of 68. The first two baccalaureate degrees were granted in 1926. While emphasizing theology and liberal arts, the Benedictines strove to meet the vocational needs of immigrant populations as well as staffing requirements of their own hospitals and schools.  Excavation for completion of the frontal administrative unit of Tower Hall began in 1927. The five-story addition was completed in 1928. St. Scholastica reached a milestone in 1931 when accreditation from the North Central Association brought it national recognition as a degree-granting institution. Academic leadership and research were stressed early as an integral part of the College’s commitment to Benedictine values. By 1938, St. Scholastica’s growth was evident with the addition of Stanbrook Resident Hall, Rockhurst Auditorium (which burned in 1976), Chapel of Our lady Queen of Peace, the Library and two connecting cloisters. These buildings were later joined by Somers Hall (1964), the Science Center (1969), the Grove (1972) and Pines (1973) apartment complexes, and the Reif Recreation Center (1979). In 1986, the Chapel and Library exchanged places with two floors added so that the current Library occupies the upper three floors. More student apartments were built including Willow and Maple in 1989 and Birch in 1990. Tarry Hall, the Home Management House, and the Greenhouse were all demolished in 1991-92 with the Wintergreen Garage/Maintenance Building built on that location. An expansion adjacent to Tower Hall was built in 1993 for Mitchell Auditorium and a student union. A wing was added to Somers Hall that same year. A third floor was added to the Science Building in 1997. More student residence halls were built with Cedar in 2003 and Scanlon and Kerst in 2005. Two additions have been made to the Reif with the Wellness Center in 2004 and the Burns Wellness Commons in 2007.  St. Scholastica officially became co-educational in 1969. Its mission was further broadened in 1973 with the introduction of a graduate study program in education. Over the years, ties between St. Scholastica and the surrounding community steadily grew. WSCD-FM, a Minnesota Public Radio affiliate, began broadcasting from studios on campus in 1975. Five years later, the Benedictine Health Center opened up with 120 beds for skilled nursing care, adult day care, and child day care services. Growing unemployment on the Iron Range and a shift in the region’s economic resource base during the early 1980s prompted the development of the ENCORE! Program to meet the needs of growing numbers of people returning to school to prepare for career changes. In 1980, St. Scholastica established a study center in Louisburgh, County Mayo, Ireland, to enable students to complete a quarter’s liberal education course work while experiencing intercultural exchange, travel, self-reliance, and personal enrichment. There are now ten study abroad programs some of which have a service learning component.  Currently the College offers more than forty undergraduate majors and pre-professional programs, twelve master’s programs, and two doctoral programs. There is also an Accelerated Learning program, which offers courses in the evening. The 2010-11 enrollment stands at a record 3,898 – 2,856 undergraduate students and 1,042 graduate students. There are 161 full-time faculty. The College has five campuses in Minnesota located in Brainerd, Duluth, Rochester, St. Cloud, and St. Paul as well as offering many online courses to students throughout the world. 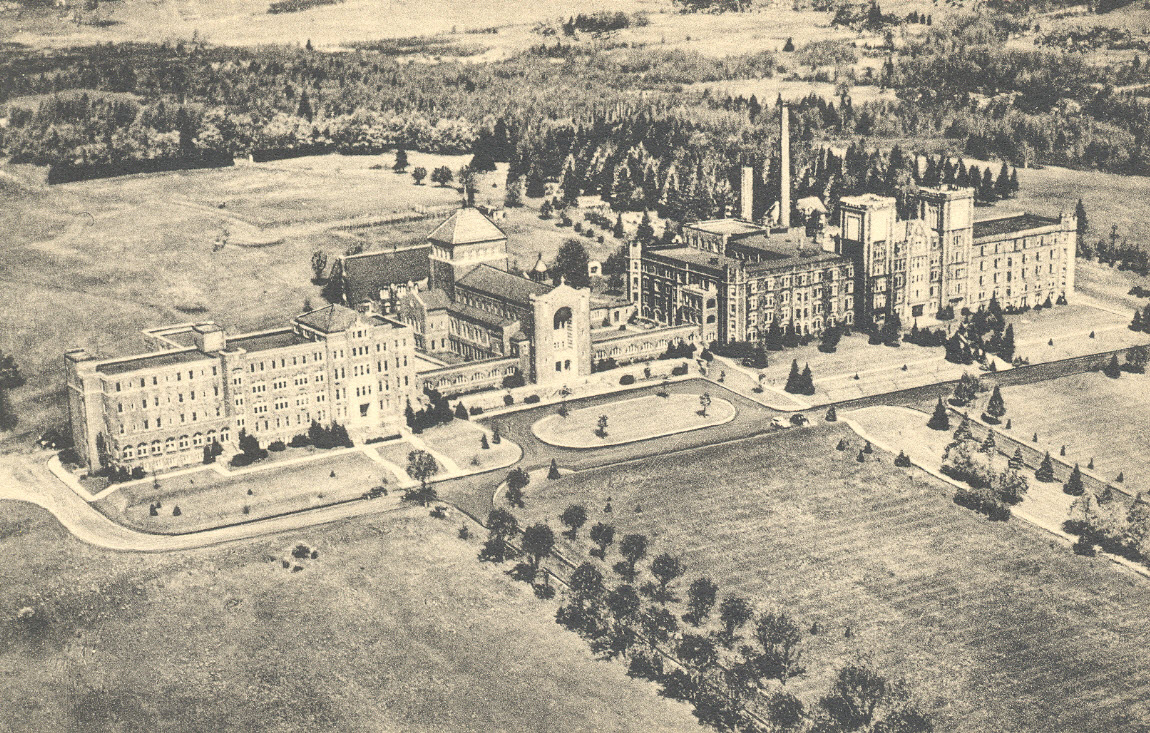 Upon a blue field is a silver lily, blooming with three flowers symbolizing the Trinity. The base of the lily is enclosed by a silver crescent, the heraldic symbol of the Virgin Mary, and also designating the purity of Christian teaching. A golden crown in the medieval style encircles the lilies above, recognizing the dedication of the chapel to Our Lady Queen of Peace. The book traditionally denotes a college in heraldry, and occupies the center of the field. On the book is the College motto, taken from the Book of Proverbs (3:17): Omnes semitae ejus pacificae, "her ways are delightful ways, her paths all lead to contentment," an encomium to Wisdom, and reminiscent of the Benedictine watchword, "Peace."  The Shield is often shown in the College colors - blue and yellow.

The College of St. Scholastica will be widely regarded as an academic community grounded in the rich Benedictine heritage and sending forth thoughtful leaders, sharpened and sensitized by the liberal arts, who are committed to serve and to transform the world.

The purposes of The College of St. Scholastica are to:

Foster an environment in which students, staff, and faculty will be inspired with the Benedictine values expressed in community, hospitality, respect, stewardship, and love of learning.

Prepare students, through undergraduate and graduate programs, for responsible leadership in professional positions and/or advanced studies.

Lead public interfaith discussions of ethics and peace and justice issues in the tradition of our Catholic, Benedictine intellectual heritage.

Ensure continued access to a faith-based institution of higher learning through proper stewardship of human and fiscal resources.