Learn about the Dignitas Program at The College of St. Scholastica.

Each Dignitas course focuses creates a unique learning experience for CSS Freshmen students. Here are just a few of the creative projects from Dignitas classes.

The seven videos posted below were produced by spring 2013 Dignitas students in the section titled Children, Poverty and Social Justice. Their final assignment was to look world-wide for an example of a social injustice which affects children in poverty. In groups, they did research on this issue and then produced a video which described the problem, showed people working to ameliorate it, and told what they learned from the experience.

This CSS Life is a production of one of our Dignitas classes. Modeled after the award-winning NPR radio program This American Life, each episode of This CSS Life is centered around a theme, with each act exploring variations on that theme.

As an end of year celebration, students from the Gender Norms, Violence and Dignity class attended the Take Back the Night rally and march in downtown Duluth. In the picture attached, student Mary Jo Ziesmer lead the chants for marchers over the megaphone. She did a powerful job! In addition to being a part of such a great event, students got a real life view of some of the challenges downtown Duluth sees at night, forcing them out of their comfort zone and allowing them to broaden their horizons. Nuns on the Bus

Faculty member Mary Bridget Lawson and her class visited the "Nuns on the Bus." 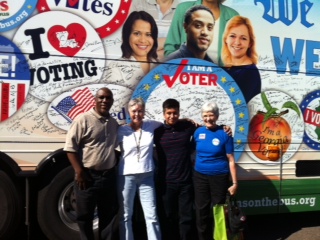