Apps for Educational Use: Home

Most of the descriptions provided for the Apps come directly from their manufacturers.

The College of St. Scholastica will not accept financial or other responsibilities associated with the use of these Apps or their effects on individual devices.

Please review the requirements for the Apps to make sure they are compatible with your device.

Finally, as with anything provided online and especially for free, you need to evaluate the credibility and reliability of Apps in order to make an educated decision as to whether or not you trust the App enough to use it.

How can this LibGuide Help Me?

This LibGuide contains explanations, articles, and links to help you use apps on smart phones and tablets such as an iPad for educational use.

There are three tabs at the top including:
1. Educational Apps
2. Healthcare Apps
3. Well U Apps

The first app that would be helpful to have would be ours from Scholastica. It is designed for smart phones, but it can be used on tablets, too. It has information about everything from sports, to the GDR menu, to the Library.
Click here for a link to it

So explore the tabs and pages as they are designed to help make using apps on your smart devices easier and hopefully more enjoyable for you. Good luck!

Definitions to help you understand the latest technology:

Apps – Short for Applications, which act as software for smart devices such as phones and tablets and can be downloaded either for free or for a charge.

Mobile Devices/Technologies – Generic term for all technology such as iPads, iPhones, iPods, etc. that have access to the Internet. 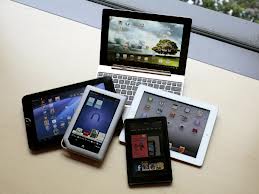 Tablet – generic term for an iPad and other similar android devices that are able to be connected to the Internet and have a touch-screen.

VGA Connector – Video Graphics Array connector, which allows the tablet to be connected to a LCD projector.
*All classrooms at CSS have this.

HDMI Connector – High-Definition Multimedia Interface, which also allows the tablet to be connected to a LCD projector.
*Not all classrooms at CSS have this yet.

Apple TV – broadcasts signal and can be plugged into LCD projector to allow for wireless use of tablet.