About The College of St. Scholastica Library: Welcome

Welcome to the CSS Library

Mission
The College of St. Scholastica Library is vital to scholarship and a sense of community for all students, faculty and staff. As both a physical and virtual space, it serves the Mission of the College by providing instruction, services, and access to resources that support the teaching mission of the College and foster independent intellectual inquiry. The Library supplements and enhances course-related instruction, providing a bridge to the kind of independent learning and critical thinking skills graduates will rely upon in their future personal and professional lives.

Vision
As a vital part of the academic community the College of St. Scholastica Library will play a central role in the realization of the College's vision. It will strive to preserve, disseminate and instruct in the retrieval and use of knowledge in order to provide faculty, staff and students with the framework to realize the College's and Library's missions.

The College of St. Scholastica Library's mission is first to support the College's curriculum and to provide resources to CSS students, faculty and staff but welcomes visitors and local users. Hours are posted on the Library's homepage.

All non-CSS borrowers are required to apply for a special borrower's card at the Library's main desk. Proof of identification such as a driver's license, student ID card, etc. is required.

Books can be checked out for four weeks, with a limit of two books at any given time. Only area college faculty are able to check out audio visual materials. Other items excluded from circulation include laptop computers, reference books, periodicals, course reserves, and masters thesis and projects.

Public computers are available for access to the Internet in order to use the catalog and databases to find books and articles for research.

The Library is connected to Tower Hall and is on the second floor directly above the Our Lady Queen of Peace Chapel. When coming in the main entrance from College St. and Kenwood Ave., go to the left between Somers Hall and the Science Center. You will see the Chapel with its grand stained glass window. There are visitor parking spots in front of the Chapel.

Maps and Directions to Campus

The Library is in the upper floors of Our Lady Queen of Peace Chapel, built in 1938 on the eve of World War II, in the Romanesque architectural style. The Library was originally on the first floor with the Chapel above. A major renovation occurred in 1986 where the Chapel and the Library exchanged places. The tall ceilings of the Chapel were divided into three floors. 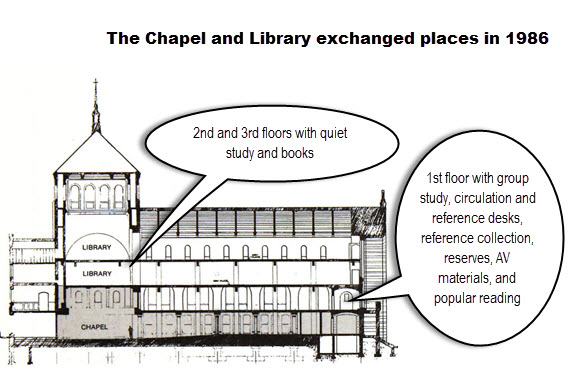 It is very intentional that the chapel and library share a building. As Sister Joan Braun, former College President & Librarian, is quoted as saying at the Library’s renovation dedication on September 25, 1986, “Medieval libraries were housed near the Church; St. Scholastica's library is now housed above the place of worship. I would like to suggest to you that this location has a rational relationship as well as a symbolic one. In the library, we seek knowledge; in the chapel we seek wisdom which builds on knowledge.”

The first floor of the Library has the circulation and reference desks and is for group study with research resources and public access computer terminals.

The second and third floors are quiet study floors and house the majority of the books.

Our unique Library retains much of its original old-world craftsmanship after the renovation. Marble pillars, leather studded doors, embossed ceilings, exposed wooden beams, and stained-glass windows made by Emil Frei, Inc. in St. Louis, Missouri can be seen throughout the Library.