Gaming in the Library: Family Games

Get your game on at the Library!

A game of hilarious comparisons. Apples to Apples consists of two decks of cards: things and descriptions. Each round, the active player draws a description card (which features an adjective like "Hairy" or "Smarmy") from the deck, then the other players each secretly choose the thing card in hand that best matches that description and plays it face-down on the table. The active player then reveals these cards and chooses the thing card that, in his opinion, best matches the description card, which he awards to whoever played that thing card.

"To Bean or not to bean!" Ever wanted to be bean farmer? Come on, you know you have! In Bohnanza (Bohn is the German word for bean) players control two or three bean fields while trading and competing with other players for the cash the different kinds of beans bring when harvested.

Codenames: Pictures is based on a map board of cards made up of very strange symbols.  What are these strange symbols? They are code for locations where spies must contact secret agents!​ Two rival spymasters know the agent in each location. They deliver coded messages telling their field operatives where to go for clandestine meetings. Operatives must be clever. A decoding mistake could lead to an unpleasant encounter with an enemy agent – or worse, with the assassin! Both teams race to contact all their agents, but only one team can win.

Deer in the Headlights

What is EcoFluxx? Well, it has a whole food chain of woodland creatures from leaves to bears. It has frogs and snakes and trees and fish and spiders and rabbits and mice and mushrooms and worms. It has air and water and dirt, and it has the humans whose pollution can endanger such things. EcoFluxx is a card game in which the cards themselves determine the current rules of the game. At the start of the game, each player holds three cards and on a turn a player draws one card, then plays one card. By playing cards, you can put new rules into play that change numerous aspects of the game: how many cards to draw or play, how many cards you can hold in hand or keep on the table in front of you, and (most importantly) how to win the game. 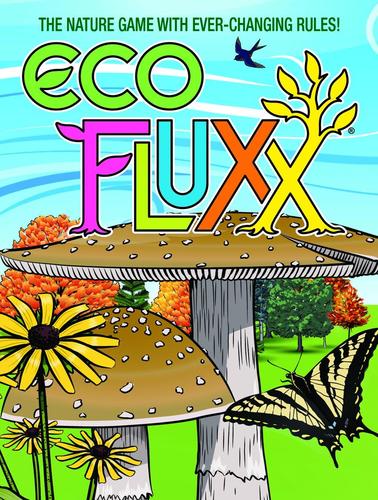 Hanabi , named for the Japanese word for "fireworks" (written as 花火; these are the ideograms flower and fire, respectively) is a coopertive game for 2-5 players where players do not play against each other but work together towards a common goal. In this case the players are absent-minded fireworks manufacturers who accidently mixed up powders, fuses, and rockets from a fireworks display. The players must work together to stop the fireworks show from becoming a disaster!

Born during the Great Depression (patented in 1935 with earlier variants dating to 1904), Monopoly is another American classic that has its die-hard proponents (and detractors) in the gaming world. Buy and sell real estate to become the top realtor of the gaming world. Income is gained when other players visit your properties to conduct business or vacation. Monopoly is unusual in that the game has official, printed rules, but most players learn how to play from others, never actually learning the correct way to play. This has led to the canonization of a number of house rules that make the game more palatable to children (and sore losers) but harm the gameplay by preventing players from going bankrupt or slowing down the rate of property acquisition, thus extending the duration of the game.

Munchkin Treasure Hunt is a simplified board game version of Munchkin, designed for younger kids (6+). Players move around the board, enter rooms where monsters await, draw one or two cards to see how strong the monster is, then defeat it. The player with the most treasure at the end wins.

Pandemic is a cooperative game. You and your fellow players are members of a disease control team waging a battle against four virulent and deadly diseases. Your team of specialists must find a cure for these plagues before time runs out, stomping out disease hotspots as the game progresses.

Super Scrabble is just like regular Scrabble, only bigger. There are 441 spaces, instead of 225 and 200 letters instead of 100. Quadruple letter and word squares have also been added to the board for more gaming excitement.

Tsuro of the Seas

In Tsuro of the Seas, you will sail the treacherous waters of the Mystic Seas in an engaging game of adventure and suspense! As the captain of a mighty ship, you will navigate the seas by placing wake tiles to direct your vessel. Take great caution to avoid your opponents’ ships… and the dangerous daikaiju (monsters) lurking under the surface. Guide your ship with a steady hand and be the last captain sailing to survive the Mystic Seas and win!

In Uno players race to empty their hands and catch opposing players with cards left in theirs, which score points. In turns, players attempt to play a card by matching its color, number, or word to the topmost card on the discard pile. If unable to play, players draw a card from the draw pile, and if still unable to play, they pass their turn. Wild and special cards spice things up a bit.